In the recent week, the relevant information of the Belgian auto show in the passenger car circle was rehabilitated at every minute. Yutong New Energy Bus, Daikin Dragon Solution+, Golden Travel Europe VI Trailblazer, BYD pure electric double-decker bus and other words always occupied the industry's headlines. The phenomenon of the pursuit of Chinese self-owned brand passenger cars at the Belgian auto show ignited the hearts and minds of each bus passenger: work hard for the Chinese bus to take off, and all your efforts are worth it. 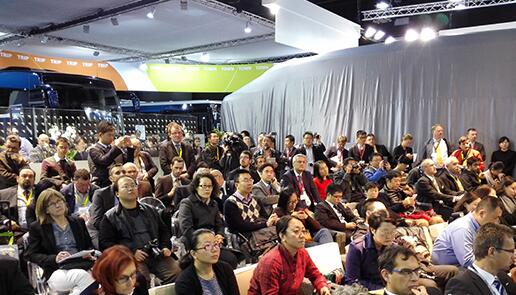 Of course, efforts for the take-off of Chinese passenger cars also include the assistance of many passenger car-related equipment and component companies. It is the progress of passenger car-related equipment and component technologies that has only contributed to the improvement of vehicle performance once and for all. It is reported that more than 20 companies, including Cummins, Allison, Oukeja, blog compressors, etc., participated in the Bus Exhibition at the Belgian Bus Show in 2015. They witnessed a grand event with Chinese passenger cars. The moment of the Chinese bus in Belgium.

Cummins bring intelligent and efficient power come prepared <br> <br> as global passenger car leader, this biennial global passenger car festival how can less red whirlwind Cummins! This exhibition, Cummins bring its latest intelligent and efficient The passenger car engine project achievement section comes and meets the Euro 6 emission OBDC stage standard to be implemented in 2017. At the same time, it has set a new benchmark for the industry in terms of improving fuel economy and reducing the operating cost of the entire life cycle.

Since 2013, Cummins has supplied nearly 20,000 ISB 4.5 and ISB 6.7-liter engines that meet the Euro VI standards in the global market. With the upcoming implementation of Euro 6 on-board diagnostic OBD upgrade version 2017, Cummins's exhibitors will complete further efficiencies around meeting new standards. Cummins' â€œsmart and efficientâ€ projects will successively release important improvements in key products, including: calibration optimization, new start-stop system, more powerful power and torque, and further exploration of the efficient use of hybrid power. Cummins hopes to bring real benefits to customers through the effective promotion of power systems and the reduction of operating costs. It is worth mentioning that, in addition to the European 6 veterans represented by the ISB, the ISF 3.8 has also made its debut in meeting the Euro 6 emission OBDC phase.

For decades, Allison Transmission has become the standard configuration for VanHool exports to the North American market, but the TX17 is VanHool's first model equipped with an Allison transmission for the European market. At the 2015 World Bus Expo, Allison Transmission demonstrated its new fully automatic gearbox product that was recently expanded in the European market. At the same time, Allison Transmission showed its T2100 gearbox and H50EP system in its booth No. 202. Since 2003, Allison has delivered more than 6,900 hybrid propulsion systems, which have accumulated nearly 1.1 billion kilometers (682 million miles), and are expected to save 137 million liters (36 million gallons) of fuel, reducing the number of 360 tons of carbon dioxide are emitted into the atmosphere. The Allison Hybrid EP system has demonstrated practical and low-cost operational benefits to municipalities and fleet operators in many European cities including DÃ¼sseldorf, Hannover and Oslo.

OAK best to help Chinese world passenger traffic <br> <br> in electrical and electronic technology as a field of continuous innovation of enterprises, OAK good as in 2003 after the French-owned enterprises to enter the Chinese market, it embarked on the popularity of CAN products, Especially since 2008, Oukeja has been focusing on the application and development of electronically controlled passenger cars, laying the foundation for the application of CAN. This time, when the Yutong Bus was looming at the Belgian Bus Show and even the entire European market, the Oukeya people also said with pride: â€œYutong exports to France are all equipped with Okeja bus products. ."

Naturally, assisting Chinese passenger cars traveling all over the world, Oukejaâ€™s credit cannot be overlooked. According to Dr. Zhang Xiaoping, general manager of Okejia (Shanghai) Automotive Electronic Equipment Co., Ltd., this exhibition, Chinese bus manufacturers (including the actual brand of the European brand is made in China) exhibited a total of 20 vehicles, of which 12 The use of Oukeja's products in Taiwan, Oko Beauty's heart is full of gratitude. Thank you madeinChina! It is reported that at the Belgian Bus Show, Oukeja brought its new MultlCCWF1.6 and CGF1 dashboards. These two dashboards are the latest products from Okeja, representing the latest scientific and technological achievements of the dashboard industry.

As we all know, the passenger bus industry in China is very cautious about the selection of passenger car-related equipment and parts and components, especially the export of passenger cars, taking into account the different needs of customers in different countries, it is even more stringent. Especially in today's increasingly customized and personalized needs, only by selecting products that are most satisfying to the needs of the local market and providing the best and most complete supporting services to win the recognition of customers, can we ensure that the market can be Continued growth. This time, the new technology and equipment components brought by the passenger car related equipment and spare parts companies at the Belgian Bus Show will undoubtedly spur the future of Chinese passenger cars.